I began playing drums at the age of 10, when my grandparents surprised me with a toy drum set for Christmas. From that point, my life has been dedicated to music.

Throughout high school, I studied drum-set and orchestral percussion with the principle percussionist of the Charlotte Symphony Orchestra, Rick Dior.

I was then accepted to the Cincinnati College-Conservatory of Music where I studied with Allen Otte, James Culley, and Rusty Burge and received my bachelors degree in percussion performance.

During my years at the conservatory, I played with jazz combo bands, musical theater pit orchestras, symphonic orchestras, and various chamber and percussion groups, including the highly respected Percussion Group Cincinnati.

Since graduating, I have been performing as a freelance musician for the past 15 years. 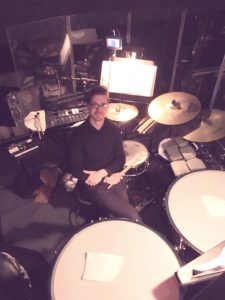 In my home of Pittsburgh Pennsylvania, I play with multiple bands ranging from old style country to electronic synth pop. In addition to these bands, I also do studio session work and sub with other local bands. I am currently on the first national tour of the Tony award winning musical, Bandstand.